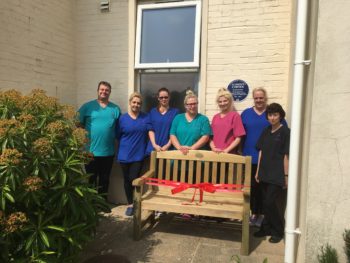 A commemorative bench and blue plaque was recently unveiled to honour Alison, a very popular past resident.

Barry Lowden, who was married to Alison for almost 50 years, attended the special ceremony to open ‘Alison’s Corner’ in the gardens, where Alison spent much of her time while she was a resident at Clifden House

The plaque commemorates Alison as a ‘friend and guest’. This proved particularly poignant to Barry, who said; “It is such a nice way of regarding all the residents at Clifden House who need help and care with their daily lives. Thank you all the staff for the way they created ‘Alison’s Corner’ and for the dedicated care she received during her time here.”

Nial Joyce of Clifden House, said: “We hope that ‘Alison’s corner’ will serve as a lasting tribute to her life and the devotion between her and Barry during their near fifty-years of marriage. We look forward to welcoming Barry whenever he wishes to visit Alison’s corner and remember happier times.”

Alison was diagnosed with a very rare form of dementia known as Posterior Cortical Atropy (PCA) in 2015. Due to the nature of her condition, staff at Clifden House needed to be very adaptive to her needs.

Early in her career, Alison taught at a local private school and this is where she met Barry. They married in 1970 and had two daughters.  As well as being a devoted teacher, Alison was a professional musician, providing piano accompaniment to professional singers and as an accomplished flautist she played in several orchestras.

The team at Clifden House aim to facilitate each person to live a fulfilling and active life, with privacy, dignity and security, for as long as possible. 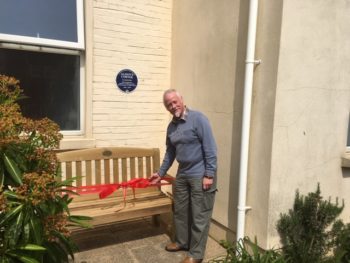